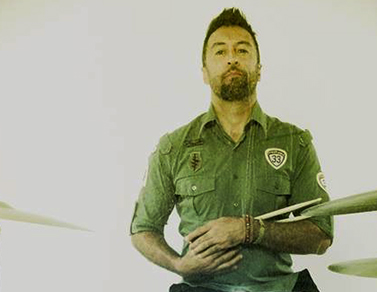 DECLAN KELLY
Declan Kelly helms the Diesel n’Dub band on drums and backing vocals. He also sings the lead vocals on his haunting version of Truganini. Diesel n’Dub is the latest addition to a growing body of work by Kelly, a respected and hard-working artist. Firmly established and highly regarded as a musician and producer, Kelly plays regularly across Australia and abroad, at the world’s biggest roots and world music festivals as a solo artist, with his trio The Rising Sun, or as a special guest. Across the industry he is sought after for his drumkit skills resulting in tours and recordings with international artists the likes of Passenger (UK), Spearhead (US), Stranger Cole (Jamaica), and Eugene Hideaway Bridges (Texas, US). Locally he has collaborated with artists Alex Lloyd, Katie Noonan, Karise Eden, OKA and KingTide and most recently had two tracks from his stunning album “Adrift” featured in the BBC series “Top of the Lake” directed by Jane Campion.
declankelly.com.au 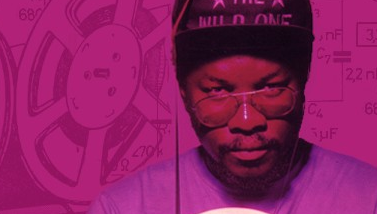 MAD PROFESSOR
Equally renowned for producing deep roots reggae, trance inducing dub and bittersweet lover’s rock, the Mad Professor’s Ariwa Sounds stable is a veritable institution of British reggae. Throughout a legendary career that has spanned over a quarter of a century, Mad Professor (Neil Frazer) has recorded dozens of hit singles and albums; as well as contributing his dub genius to the works of stellar artists the world over. Not only has he produced hits with luminaries the likes of Sly & Robbie, Lee “Scratch” Perry, U Roy, Horace Andy, Yabby You and Scientist he has also lent a dubwise hand to a multitude of international musicians; from mixing material for the Beastie Boys in the 80s; to altering the manic creations of radical duo KLF and spaced-out ambient house pioneer, The Orb. He has created sensual dub for Sade and a historical dubwise deconstruction of Massive Attack’s album Protection. Further collaboration was achieved with pop kings Jamiroquai; edgy Swiss techno-rockers The Young Gods; Boston neo-ska group Bim Skala Bim, as well as New Zealand’s Salmonella Dub. Now Mad Professor has lent his inimitable stylings to some of the most iconic Aussie hits ever, taking the songs of Diesel n’Dub to a whole new level. Those who have had the pleasure of spending time in Professor’s company know that he is a man of high intelligence and easy wit, committed to progressive social change as well as evolutionary music; he is also a gentleman in every sense of the word. (Parts of this bio courtesy of Ariwa website and David Katz)
ariwa.com

Emma Donovan
Emma Donovan has established herself as one of Australia’s finest Indigenous singer/songwriters. With the inclusion of her traditional language Gumbayngirr in her songs, Emma is committed to educating the global community to understand more about Aboriginal culture and spirituality. Originally from Northern NSW; Emma has performed across the globe treating audiences to her rich soulful voice as a solo artist, and as part of the award winning Black Arm Band. Seamlessly blending genres from roots, reggae and gospel to smooth soul; Emma continues to have a major impact both on the Australian main stream stage and in the international arena! (Photo thanks to John Domeney)
emmadonovan.com

Frank Yamma
Frank Yamma is a traditional Pitjantjatjara man from Australia’s central desert and speaks five languages. An extraordinary songwriter and an exceptional guitarist, Frank Yamma also has an incredible voice, rich, deep and resonant. Regarded by many as one of Australia’s most important Indigenous Songwriters, Yamma’s brutally honest tales of alcohol abuse, cultural degradation, respect for the old law and the importance of country are spine tingling. His ability to cross cultural and musical boundaries constantly sets new standards through his music.
wantokmusic.com

Pat Powell
Pat has a voice that will take you on a journey you hope never ends… strong, dark, powerful, mesmerising. He is a singer with serious street cred and has fronted many successful bands including Club Ska, Sly-Tone, TenWedge, Neptune Street and all have led to international supports from Queen, The Eurythmics and James Brown to Sidney Youngblood, Technotronic, Luciano and Horace Andy.
patpowell.com

Radical Son
Effortlessly crossing genres from soul to hip-hop and beyond, Radical Son is a standout vocalist and songwriter like no other. His often-poignant lyrics chart a course from hopelessness to healing; mercilessly deconstructing what is, and forever imagining what could be. Radical Son’s music and stories are always guided by his Indigenous heritage from the Kamilaroi nation of Australia and the south pacific nation of Tonga. As a vocalist, Radical Son has a unique ability to deliver as a soul singer, rapper and spoken word artist. This natural dexterity defines his earned place and presence in the contemporary musical landscape. The back-bone of radical son’s stories continuously urge our human spirit to approach life through love and compassion.
radicalson.com


Tony Hughes
Frontman to Australian reggae music’s royalty Kingtide, Tony Hughes has performed with numerous reggae, dub, dancehall, ska and rocksteady acts over the years. Growing up in London during the golden age of Caribbean roots music, Hughes is blessed with a voice that is authentically hoarse, gutsy and 100% made for reggae.
kingtidemusic.com

Tina Harrod
Tina Harrod’s journey of musical discovery, like many great artists, continues to unfold. Pushing boundaries and blazing a path of her own, she has the ability to communicate universal themes in intensely personal songs. Recognised as one of Australia’s great singers, she has released a collection of stunning recordings that have won awards and critical acclaim.
tinaharrod.com

Stiff Gins
Stiff Gins are one of Australia’s best known and most loved Indigenous acts. These two women combine their stunning harmonies and wicked humour to transport you to a world of joy, spirit and song and the Stiff Gins Nardi Simpson and Kaleena Briggs have much to celebrate. Thirteen years ago, their moniker was reclamation of an offensive reference to Aboriginal women, a banner to guide their music in the direction of strength and pride. Several albums and countless breathtaking shows later, the name has become synonymous with musical excellence. They have travelled the world, received prestigious awards, and created a loyal fan base with their heartfelt songs and emotive performances.
www.stiffgins.net